We have been focusing on preparing the boat for sale, including cleaning rugs and cleaning and re-oiling the inside and outside teak. But on my birthday, the 30th and on the 31st we made time to enjoy the beaches and waters of the area.

In the afternoon of my birthday  we took the dingy down nearby Sister Creek to Sombrero Beach where we met our boat friends Jane and Brice. (We met them the Mobile AL marina and were happy to see them again here – they have a 40′ sailboat that takes them wherever they feel like heading 6 months of the year). They were impressed when I rigged up our big rainbow umbrella to a folding chair using a curtain rod and duct tape – until it fell down whenever the person in it stood up! Two other new friends joined, we chatted and I swam a bit, and later we  went out to dinner via our dinghies. 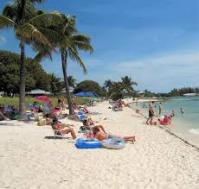 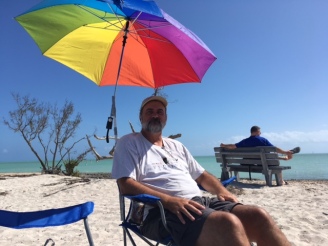 Saturday morning we left the boat early – 9:30 – to dingy to the marina and walk to the KeyWest transit bus stop to get to Captain Pips Snorkeling adventure  in Marathon. I had figured out the stop the previous night, but we missed it and it was the last stop in Marathon before the 7-mile bridge! Opps!  We got off at the other end of the bridge and figured out we could make it back on the next shuttle going up to Marathon in an hour – if they were on time (which didn’t seem to happen with these shuttles). So when Dirk suggested I knock on the window of a car leaving the park next to us, I did (!), and after the initial surprise they were nice enough to give us a ride back over the bridge to our destination. Never a dull moment around here!

The snorkeling trip was fun. We cruised in a large and fast catamaran about an hour out to Sombrero Reef, a well-known snorkeling spot. They provided the equipment and we saw many fish, coral, sea fans, etc. The water was stimulating but not too cold, and it was a large area so we didn’t run into each other except close to the boat (there were about 45 of us). The only downside was that the winds and waves were higher than expected and I had to cut my snorkeling short due to feeling a bit queasy. 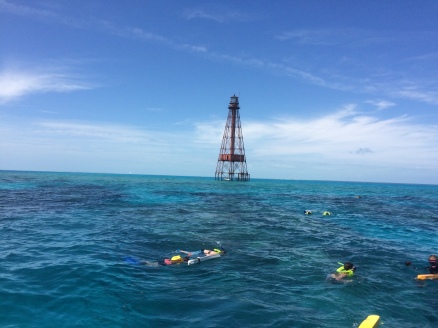 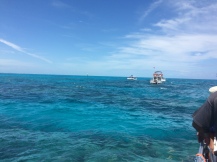 After we returned to Captain Pip’s and rested a bit we set out on a 20 minute walk to the west end of Marathon to the Sunset Grill. On the way we walked to the start of the old railroad bridge that used to cross the 7 miles to the next key. There’s a park there now and I think people will be able to walk and fish on the old bridge once repairs are completed. That seems to be a common use of old bridges in Florida.

The Sunset Grill is a restaurant with a pool! We knew that and had planned on washing off the salt water while we relaxed and waited for the entertainment to begin. The band was headed up by Ty who ran the City Marina and just retired this week (we attended the retirement party!)  He and the band were great and we were able to enjoy them while we again ate out (2 nights in a row!) with friends Jane and Brice and another couple. 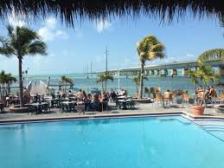 And then we all took a taxi back to the marina, we got in our dingy and collapsed once we were back on the boat!