We left Panama City without first getting a pump out because there were a few boats already waiting for fuel and a pump-out at the dock, and we figured we’d be in the next marina soon. However after about 15 minutes travel we had to go back – guess who had left their phone in the bathroom in the Marina office!! So back we went, and it turned out to be a good thing because the next marina’s pump-out is broken and it will be a while before we have another opportunity.

We had a easy but fairly long day, partially because the second part of it was in a long, windy, narrow canal with few anchoring spots. Around 3:30 we came to the small White City free docks next to a park and a fishing pier, and tied up there for the night, getting some help and advise from some the local fisherman. After walking a ways to a General Store for ice-cream, as we returned to the boat we saw a sign on the dock, facing the park, not the water, that says “No overnight docking”.  We checked with the locals who advised us to ignore it, because boats like ours stay there all the time, so  that’s what we did.  It was a peaceful night with a great view of stars, and since we had a short day planned we took our time leaving. 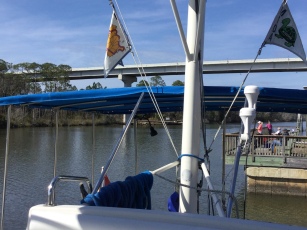 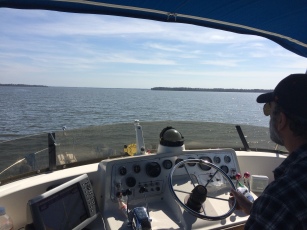