We spent a few days cleaning up, doing some laundry, walking around the marina area (it was rainy at the time) and borrowing the courtesy car at the marina to get a few supplies we needed. 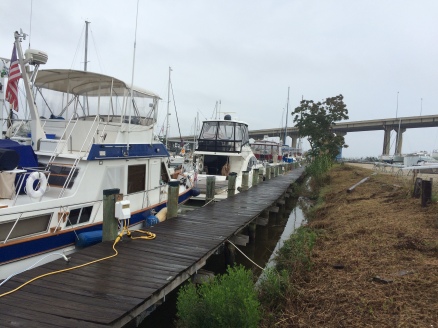 There aren’t any stores, restaurants or shopping sites nearby, and since we are renting a car to leave Thursday morning to go to New Orleans, we decided to pick it up a few days early so we can visit some Mobile area museums and sites.

Today’s destination was the USS Alabama Battleship Memorial Park. Dirk is very interested in older military boats and planes, and I usually enjoy stories of people who have worked with them. The museum on the Mobile harbor includes the massive USS Alabama Battleship, an airplane museum and the oldest American submarine on public display, the USS Drum, as well as a number of other planes, boats, helicopters and tanks on the lawns.  The airplane museum also had a few exhibits on WWI and WWII planes and was running films on the Tuskegee Airman of WWII and the battles Pacific campaign so we spent about an hour there before going into the submarine.

The USS Drum was very active in the Pacific in WWII and was decommissioned after the war, and later donated to the museum (without funds for maintenance as I understand it). Walking through the submarine was interesting but then we found two notebooks to look through in a small mess hall. One contained trip reports with maps of their paths. The other was by a former sub mariner, Tom Bowser, who began volunteering to help restore the sub starting in 2000 and has practically devoted his life to it since then. He and the one employee responsible for the sub museum (Lesley…) along with other volunteers and donations they have raised,  have practically rebuilt it from inside out and the notebook shows before and after photos of rooms, huge metal sidings rusted out and repaired, and so much more. To put that much very hard work (sandblasting, bending metal – themselves !) and dedication and fund raising effort into a project – well, amazing. 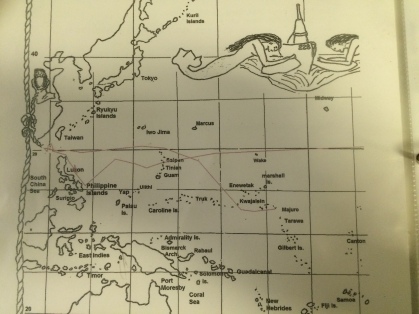 Example of before and after work…

After a quick lunch in the museum we started our tour of the USS Alabama. Fortunately a self guided tour guide is provided to help us find our way around and up and down the ship. We went up about 7 levels and down 3 and still didn’t see all we could have before it was time to leave.

We found a Vietnamese restaurant for dinner and are back on the boat now.

3 thoughts on “A Few Days in Mobile Alabama”