Well, here we are, a few days earlier than expected, and there are so many Great Loopers here it is amazing. By “here” I mean at the Turner Marina where we are tied up and at the Dog River Marina next door where most of the people we have recently been traveling with are staying.

We slept in a bit and didn’t leave our anchorage today until 8am (which used to be an early time) and had wonderful weather for today’s trip. The day was sunny and it warmed up nicely – what a treat.

The landscape began looking more southern and more industrial as well, and finally we were in the Mobile Alabama harbor. 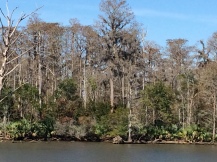 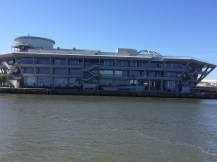 We passed all sorts of commercial and military ships, and dry docks for ships as well. 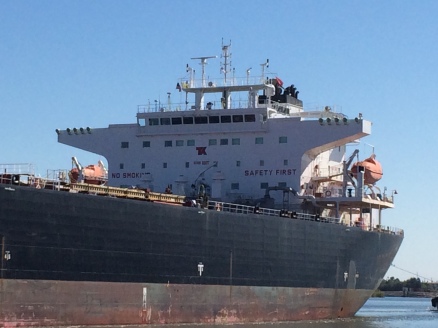 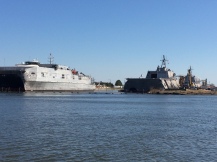 After about 5 miles on the Mobile River we were out in the Mobile Bay, and then found the channel that would lead to our marina.

Once we were all set in the Turner marina we met new (to us) loopers and then walked to the marina next door to find the people we’d been traveling with;  Bev, Bruce, Tammi and Mike at Dog River. We  all dingy’ed to dinner across the small river and had at great time also with new friends Steve and Betsy.

One postscript –  As we were leaving the ‘other’ marina after dinner to cross over to ours, we found locked gates that blocked the way. As crazy as it seemed, we couldn’t find an opening, but Dirk found a ladder! He leaned it again a large container next to building where we climbed up the ladder, over to a ledge, through a railing, down some steps and then walked back to our marina. I wonder if anyone will take notice of the ladder’s strange position in the morning. See ladder below…