Saturday was the day to explore the town of Alton and also to enjoy some of our fellow boaters now that initial boat supplies and laundry were handled and we’d been to the big city (St. Louis).

Alton is a town built on a hill rising from the big river. Its beginnings go back to around 1820 and it grew rapidly as an industrial and trading town along with other river towns. Many elegant and stately buildings from its hey-day are still here, and many hilly streets are still paved in brick.

Some of us boaters from the marina enjoyed visiting a nearby farmers market in the morning, buying fresh produce and some clever, local goods. After off-loading my purchases I set off to see more of this older town with a main street of many antique shops, a great pottery store, a candy and gift shop and a interesting “far-out” store called “It’s Raining Zen”! I also walked to the local Unitarian Church (on the right). Pretty impressive looking!

Dirk and I suggested to a number of loopers and other boaters that we meet for “docktails” at around 5:30, which usually means bringing something to share – like chips and dip – and BYO drinks. Since I  already had planned a “simple make your own burrito” dinner for our friend John, I just expanded it a bit and brought a lot of burrito supplies to the gathering. I kind of overdid it as I sometimes do, but everyone who stayed for the light meal enjoyed the result.

At one point, Dirk heard a boater say that he had an extra ticket to a walking tour of haunted sites in Alton, and Dirk said – “Pat will go” and I did!  We’ve seen that haunted tours are popular in many tourist towns but was never tempted until here in Alton, because I understood it would also provide a history tour at the same time.

First a few surprises – (1) the walking tours was from 8pm to midnight! (2) It started and ended at the Unitarian church! and  (3) It was sold out with about 25 people attending! The tour was very interesting and there was some discussion of the town’s history, but to me the most surprising thing was the sincere belief in ghosts and that ilk and the dedication of our tour guide to providing proof and participating in ghostly investigations. We walked to a number of old  buildings and were actually able to go inside three of them. The most interesting was the first one. It was built as a sanitarium in the 1840s or 50s but also included underground passages for the underground railroad and a cupula that would be lit up when it was safe for runaways to come ashore from the Mississippi. We all went down into the underground tunnel in the dark and were told stories of people who felt a small child hold their hand (but no child was present) (woooo!) and other amazing stories of sightings. Here’s a photo of the building taken in the daylight.

One of the last stops was the old prison, which after it was shut down in 1850, became a horrible prison again for Confederate prisoners. That area has reported to be haunted as well. This is the photo taken at that site. 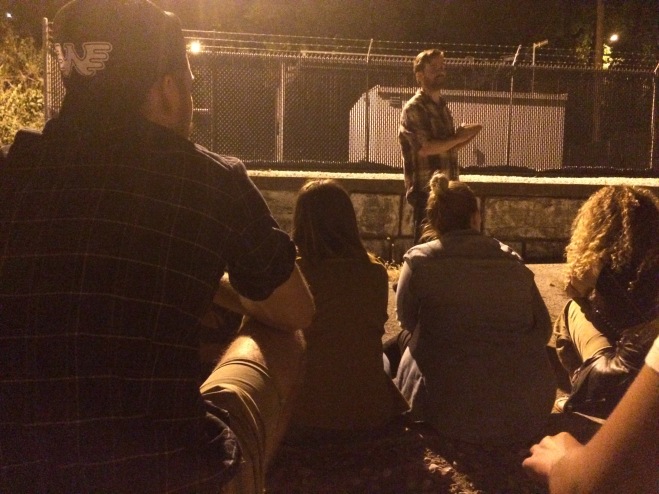 The final stop was the Unitarian Church, where orbs/dark forms and a bygone minister that hanged himself (!) have been seen at times but we didn’t see anything. The guide considered the cellar very dangerous due to possible ‘whatever’s’ that are there. We left when the lights came on!

One thought on “Exploring Alton”