As mentioned previously we headed to St. Louis on Friday, only about 40 minutes away. We found a parking garage and headed to the “Jefferson National Expansion Memorial” which includes the famous St. Louis Arch and grounds as well as the Old St.  Louis Courthouse, now a museum with offices for the park. 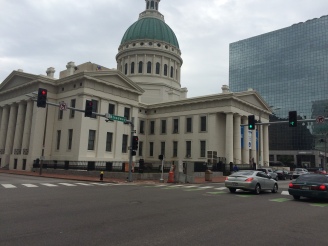 We had 11:30 tickets to go to the top of the arch, but learned quickly that those are rough estimates of time. We waited in a security line (under the arch), and a ‘learning how to getting ready to go’ line, and an ‘almost ready to go’ line, and then boarded the tiny 5-passenger cubicle for the 4 minute ride to the top, with Dirk hunched over all the way. The door is transparent making the ride up also entertaining.

The archway windows are small but still provide amazing views of the Mississippi River, St. Louis and the surrounding area. Everyone was enjoying themselves. 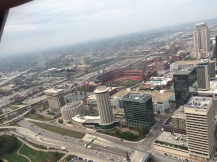 When we returned to the visitors center there was more to learn about the architect of the Arch monument, the design, history, etc.  A couple of items of interest to me – the height of the arch = the width of the arch at the base – 630 feet. Its creation was an amazing feat involving many dedicated and brilliant designers and engineers to make the vision of Eero Saarinen, the architect, come to life. 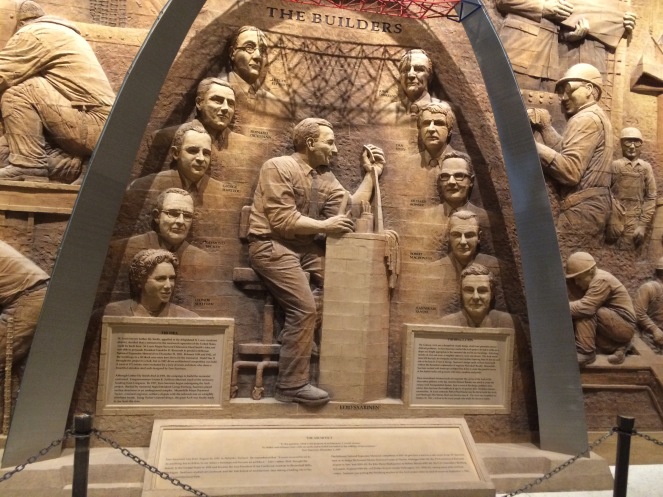 After lunch we went back to the Old Courthouse to the rooms that presented the St. Louis history of slavery and the struggle of slaves to be free. It was hard to read and see photos of what  people had to endure in the name of commerce and profits (“without slaves, our businesses would fail”) and the injustice and cruelty of people of those times.

Although I had learned about the Dred Scott case long ago, I didn’t recall its significance in moving the country toward Civil War and didn’t recall that he lived in St.Louis.  In short, although by current laws Dred Scott and his wife should have been declared free when he petitioned the court, various appeals pushed the case to the US Supreme Court which not only decided against their freedom, but did so in a way that demolished all compromises of free versus slave states including new Territories which up to then were not allowed to have slaves.  There was fierce opposition to that ruling and their insistence on fighting for their rights helped lead to the 13th, 14th and 15th constitutional amendments.

As part of the Expansion Monument, this Old Courthouse has been restored from the 1930s when it was abandoned and almost destroyed by fires and vandals. The courtrooms where the Dred Scott cases were heard have been recreated, and the entire building is now beautiful inside as well as impressive outside. 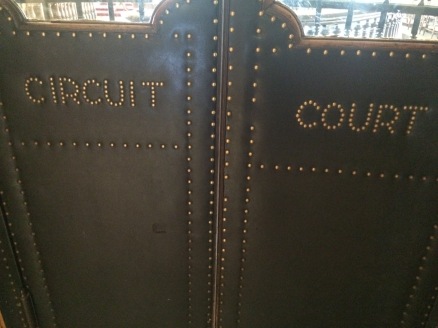 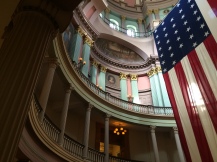