By the time the Illinois River merges with the Mississippi we’ll have been on it and its two feeders for 333 miles. It’s a long river and long journey – I had no concept of what it would be like. It is so rural now that we barely have Verizon service and not enough tonight to post this blog. Funny, because we never lost coverage in the empty North Channel of Lake Huron in Canada! (I couldn’t load these photos until we arrived at the Alton IL Marina)

There was a processing plant just down stream from last nights anchorage and I guess we were lucky to get out of there before they started processing coal. We were warned about boat getting filthy just being nearby. Maybe the huge plastic tent you see is there to prevent that. It was a bit foggy and the boat that shared our anchorage left early and stopped for a while waiting for it to clear. 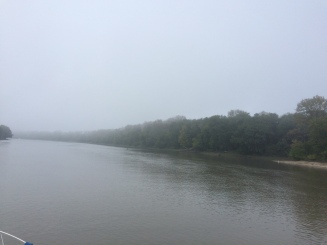 We didn’t see any towns today and just a few houses along the river and various structures that were no longer in use. That include huge electric towers, one of which had workmen near the top and it looked like it was being dismantled. 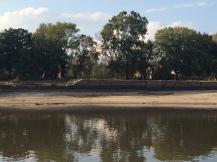 We traveled through another large lock after waiting a few hours for it to be our turn. The lock masters  at the La Grange lock were quite pleasant, but it sure isn’t pretty, and they had trouble with the water flow. Of course we saw more barges today – one large one just as we were coming out of the lock too.

The river is low as you can tell from the river photos, and two of the recommended anchorages were unusable – much too shallow for our 3.5 foot draft. We are instead still in the river off of Moores Island, but off to the side where we think, and hope, no barges will hit us! Our anchor lights are on – wish us luck!

4 thoughts on “Further south on the Illinois River”