September 6, Wednesday, Kirkfield Lock to McGregor Marina in Orillia, ON

Today’s goal was to go through the Kirkfield lock and five other locks that were close to each other. Then we’d travel through Lake Simcoe and stay on the lock wall at the Couchiching lock which would be closed due to fall hours. The map of this last part of the Trent Severn follows… 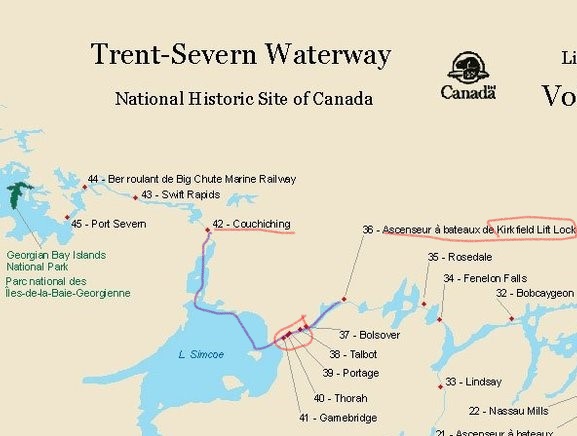 We started at the top of the Kirkfield Lift Lock which lifted us down in the water trough about 49 feet with its hydraulic lift, similar to the Peterborough Lock. 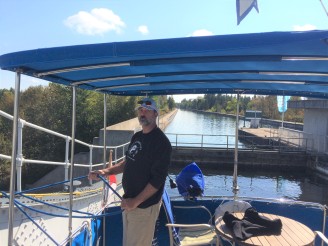 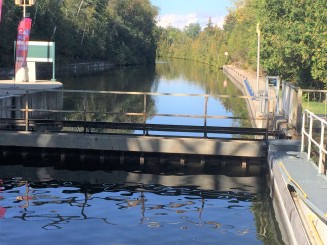 The weather was cool and I wore long underwear so I could ignore the cold. We traveled through rivers, lakes and five man made canals again in lovely weather, remarking on the interesting homes and beautiful sites as we traveled. The arched bridge was the first reinforced concrete bridge in Canada in the early 1900s. 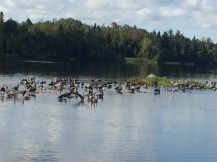 We were doing well and arrived in Orillia, home of the Couchiching lock.  We headed down a narrow channel but ten minutes later we encountered a (too) low swinging railroad bridge which turned out to be on the same schedule as the lock. The bridge keeper was not allowed to open it, so we turned around and headed back. We had passed a marina just as we entered the narrow canal so I called to see if they had room for us. The manager asked if we were the trawler they had just seen go by and laughed when I said ‘yes’. When she saw us enter the channel she remarked to a co-worker ‘I wonder where they think they are going!’.  They gave us a little break on the marina rate and we had a quiet night there – except for the noisy train (remember – railroad bridge!).