Yesterday’s rain was predicted to last all day, but it stopped a little before noon. After about a half hour we decided to take a chance and get moving again, and try to get to Smith Falls which was about 6-8 miles and 5 locks away. We had errands to run there and were hoping to get them done at the end of a day of travel.

Off we went in weather that looked ok at first. We enjoyed waiting for a river cruise boat at the Kilmarnock lock. The Kawartha Voyageur  river cruise boat is built with a bow that can be raised so the boat fits in the shorter length of the Rideau locks . We’re told they have 35 cabins and the tour lasts 5 days and the passengers we talked with gave it a thumbs up. 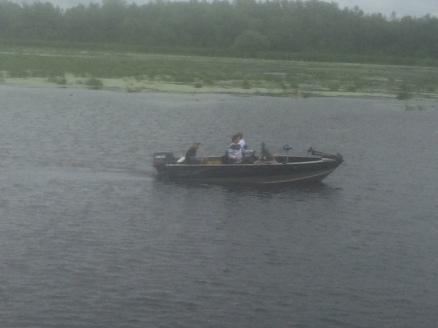 The sky grew increasingly darker, until it began to rain in earnest. We had our serious rain gear on, so our clothes weren’t wet, but we were being sprayed by rain and our guides and ipad were getting wet. We stopped for the next lock and decided to stay there until the rain let up, but were soon told that we needed to remain there for the night due to the high water in the canal. Well, that’s the bad news.

But the good news is we talked to our friend from home, Joe Holmes, and he was shopping in Smith Falls, about 10 minutes away. He came and got us at the lock (a challenge to find in the middle of nowhere) and helped us with our errands in town! Joe owns a small island further south on the Rideau Canal that he enjoys in the summer and we have been planning to visit him there, but it seems increasingly hard to get to the island with these rains holding us up!