This blog is for yesterday and today, even though it is only morning, because nothing will be happening today due to constant rain and thunderstorms.  We are staying put and inside until it lets up enough for a walk and, since it is predicted to last all day, no traveling for us today. I’m disappointed, but that’s weather for you!

Yesterday we continued to cruise south, up stream, on the Rideau Canal, including 7 more locks in 3 different towns. There’s always a lot to see on the way since the waterway isn’t very wide, and we have a few friends who might be excited by the seaplanes we saw docked at homes along the way. 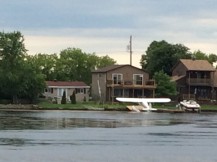 We decided to stop and look around Merrickville, having heard it was a star attraction along the Rideau, and it turned out to be quaint and lovely. There are flowers everywhere, maybe as a result of the monthly garden contest. While waiting for  our turn to start up the three locks in Merrickville we looked through an historic block house  with a small museum inside. If the rain lets up I might go back there today. 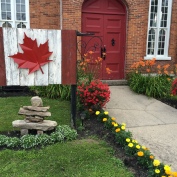 We went back to the boat  preparing to go on to the next lock, but were told that a space had opened up where we could stay the night. It was 4pm and raining, Dirk was ready to call it a day, so here we are, a good place to be in a storm.

After docking I noticed an interesting store across the street, which turns out to be an iron works shop and one of the few (I’m told) that does fine cast metal signs and other iron work signs such as are made in England. The owners have an fascinating past – among other items, she was a talk show host and he was an assistant to a Senator in the Canadian Parliament. Now they are active in Merrickville government as well as running this successful metal sign and sculpture business called Village Metalsmiths – http://www.alloyfoundry.com.

We ate in the boat and then walked to the home-made ice cream store – it had just closed! So we bought a pint of Haagen-Dazs (caramel cone explosion) and split it (I’m off my non-dairy diet for special occasions) and it was really great!

One thought on “More Locks to Merrickville”