Despite many warnings from various cruisers of the NJICW combined with positive “its not that bad if you go slow on a rising tide” suggestions, we started north from Cape May expecting to be careful to avoid running aground. What we didn’t understand was that if it was windy on the ocean it is also very windy in the waterway. Instead of protected channels there are large bays or rivers with narrow channels carved in them. The wind made it difficult to keep the boat on course and after about an hour we started calling marinas to find a place to hole up until the wind is lighter. On our way to a marina we happened to hit an unmarked shoal and one of our props became stuck. We dropped anchor to see if the rising tide would release us, but after a while we hadn’t moved, so Boat US towing service to the rescue! We were pulled out and the captain also led us the 1/2 mile or so beyond the tricky area toward the marina.

We are all set for now but have to find a marina that will help us during their busy season. The two closest turned us down so far but we’ll make calls tomorrow and figure it out.

We are at the Stone Harbor Yacht Club, a very nice, small marina that is more of a restaurant than marina but were very accommodating. It was a short walk to town full of VERY EXPENSIVE, large and quaint summer homes and cute shop and restaurants. We also walked along the well-known 5 mile beach, a draw for summer visitors. 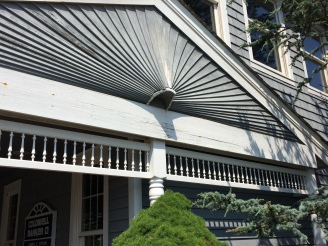 One thought on “Up the NJICW and up a creek!”