The online apps seemed to say the seas would be much better today so we left the Calvert Marina in Solomons and headed out. It was a grey and a bit chilly at first but the day lightened and finally there was sun!  The Chesapeake was pretty quiet but we saw some serious ships on the way as well as a huge off-shore oil platform and operation.

And a nice looking  tug with large barge

We decided to head to yesterday’s destination, Cambridge, which we gave up on because of the high seas. It’s an historic town on the eastern side of the bay and down a few rivers – it was 11 miles from our main route but very worth it. The town provides a free tie-up wall which is just blocks from the town center. Soon after we tied up, two other trawlers like ours came to the share the wall. We looked at each other’s boats and chatted a while, and then we walked around the area.

Wesley really wanted some fried shrimp and the restaurant (Snappers) about 1/2 block away on the water had them on the menu. We all enjoyed dinner due to their varied offerings, and got a kick out of the chair in front as well. 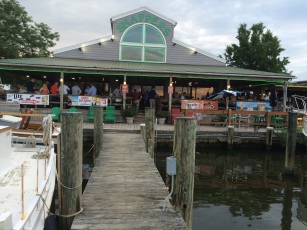 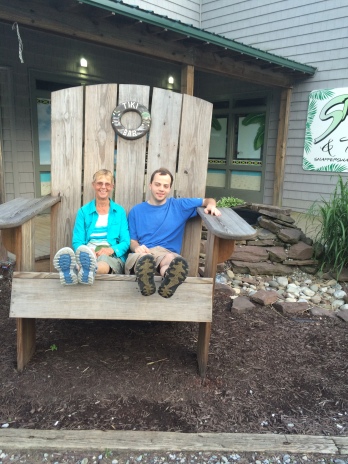 2 thoughts on “We’re in Cambridge… Maryland!”