We left yesterday’s anchorage around 9am, traveling a less stressful way out of the area that included a lovely swinging bridge. Wesley joined Dirk on the flybridge to see the sites along the way. 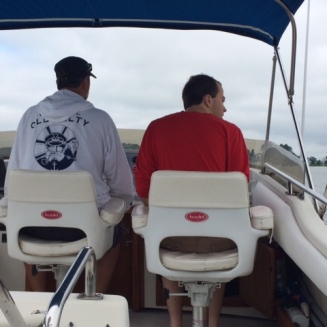 We are now in Maryland after traveling past the entrance to the great Potomac River earlier today. We had planned to go just beyond the 12 mile Potomac inlet to a protected harbor, but on closer inspection the entrance and small bays looked too shallow on the maps so we continued on until we came to a good alternative a few hours later – so an 8 hour day. Fortunately the Chesapeake was calm today so it didn’t wear us out like it did yesterday.

There so many major rivers that feed into the Chesapeake and each have a large number of rivers that feed into them, so if you have plenty of time, finding anchorages wouldn’t be a problem – we’d just head up river 5 or more miles. But we also need to be at the top of the Bay in Chesapeake City by Saturday morning so detours upstream are a concern and finding anchorages just off the bay is the challenge we had today.

As we moved north we had a surprise visit… we turned around on the flybridge and this huge ship was bearing down on us! Dirk immediately swung to port to get of her way, but it was strange that the captain didn’t call and warn us.

We are now anchored in a partially protected area – a little bumpy but ok, and again was treated to a lovely sunset, accompanied by a trio of taps on shore. There is a naval air station on shore near us. 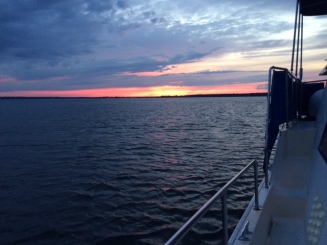 2 thoughts on “More Traveling up the Chesapeake”