On Monday night (last night) we  came up with a plan that would allow us to pick up our refurbished propellers Tuesday afternoon or Wednesday morning in Georgia, and also give us time to see Savannah, Georgia, while still moving north in South Carolina!

We headed up to South Carolina on Monday and made our way to Hilton Head Island. It was a 50+ mile day but we started at about 7:00 am to take advantage of higher tides in an area of concern, and also to make up some miles. Some sights along the way – a (hard to see in the photo) dolphin and a preserve among many homes and docks which are the norm.

We found a nice anchorage in Broad Creek among sailboats and tour boats – small tour boats on the left of us pointing out a sunken ship nearby and larger ferries on the left. We ate dinner on the sundeck and waved as the boats went by. Fortunately they all went away a bit after dark so sleeping wasn’t an issue. 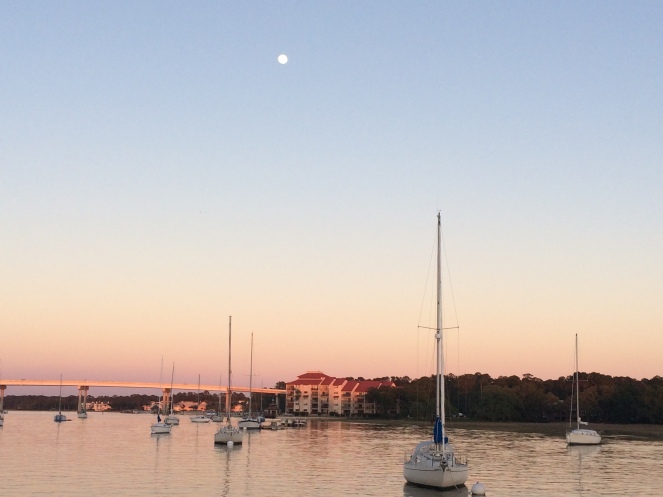 Today we started out early again with a goal to get to Beaufort, So. Carolina by noon so we could rent a car and head back south to see Savannah. It worked out fine. The marina, Port Royal Landing Marina, loaned us a car so we could get our rental car, and Savannah was only 1 hour away ( 2-3 days by boat)! We had a wonderful afternoon there – it is a very special city because it was planned from the start to have green parks every few blocks throughout the city and also because of the preservation of so many historic buildings. There is a very active riverfront both on shore and with both container ships and ferries of all sorts on the river. We also visited the park when Forest Gump sat and told his story, and found a similar setting in a store. 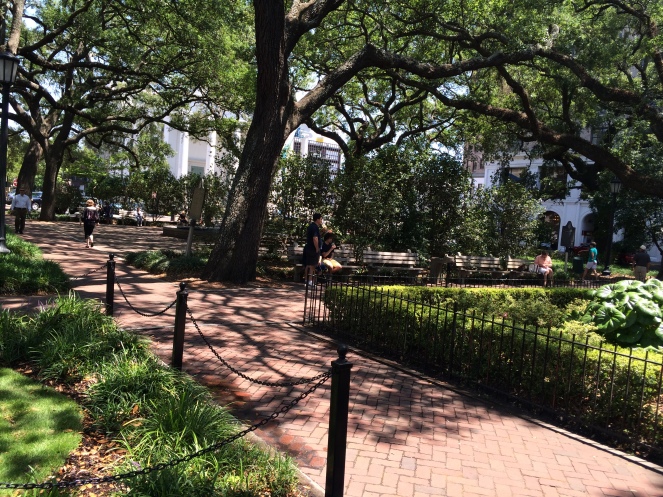 We encountered a tall ship along the waterfront – from Holland! Dirk spoke Dutch to some of the crew and we were impressed by all the work they were doing getting ready for their next parade in Bermuda and North Carolina, and later this summer in Boston.

Tomorrow we split up to get boat things done. I’ll drive 2 hours south to get the fixed propellers, while Dirk works with a diesel maintenance mechanic on his first diesel oil change. The goal is to get it all done by noon, so we can get on our way. Will it happen… ?wait and see…

One thought on “Georgia to So. Carolina and a re-visit”